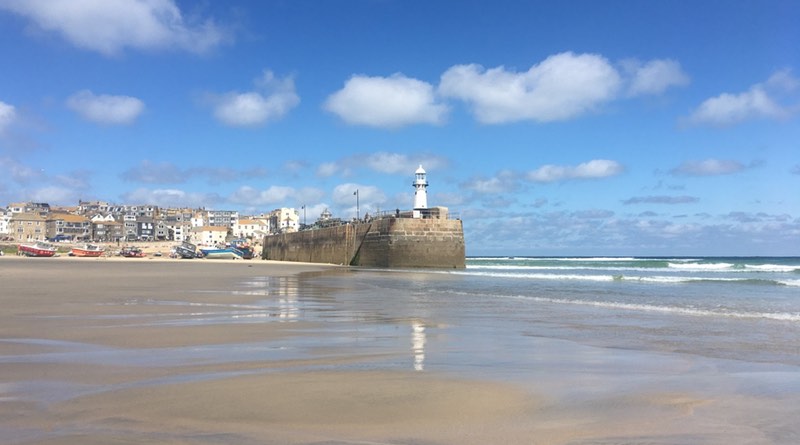 You couldn’t complete a motorhome road trip to Cornwall without visiting St Ives, the dazzling jewel in Cornwall’s crown.  So this was our destination for today.

We parked in Trenwith car park which is close to the leisure centre in St Ives. It costs £3.10 for 2 hours. The car park is a little steep in places but there are plenty of spaces. You will receive a parking ticket (fine) if you park in the bus spaces so I’d give them a miss if you don’t want to end up forking out!

The car park is located on a steep hill overlooking the bay. Those with mobility issues would probably find the walk back far too taxing. Thankfully there’s a bus service from the carpark to the bay every 10-15 minutes so there’s no need to do much walking.

Having left the car park we hopped on the bus and took the short journey into town towards the harbour. Walking down the narrow roads in the town past the little shops and artisan cafe’s you couldn’t help but be enticed inside.

Reaching the harbour-side we stood looking at the lovely view, the mixture of quaint buildings, lovely beaches, harbour and clear waters in this archetypal Cornish setting.

The beach and harbour walk

I hopped down over the rocks and onto the beach. Although not summer, the sun was shining bright, the smell of the sea was in the air, the ocean waves rolling over the beach, it was a lovely setting. I walked on the beach to the waters edge and looked out and lost myself in thought for a few moments enjoying the view.

I headed back to the others who were walking along the harbour and as we did so we were entertained by Cornish folk singers who were playing there instruments and singing Cornish shanty songs. We stopped and admired their art form as their music provided an audio backdrop adding to the ambience of the moment.

Attack of the Seagulls

As I walked around to the far side of the harbour, the vast choice of ice cream flavours on offer at the local vendors led any will power that I may have had, to crumble instantly. Despite the wide selection I went for an old favourite of rum and raisin in a lovely crunch cone. I paid my money and as I did so the guy serving said to me as he handed me the ice cream, “Watch out for the seagulls.” I smiled and half laughed thinking he may have been joking.

I had walked only a few metres, unbeknown to me I had already been seen by my assailants, singled out amongst the many to be their next victim. I continued walking and having had only two or three licks of the delicious ice cream, the first of the gang decided to make their move and pounce on me.

The first time I was aware of their presence was when I felt a significant and swift force searing over my right shoulder, striking and grazing my neck as it applied it’s violent force in order to commit the act of robbery. Its beak seared through my scoop of ice cream like a beak through ice cream. My cone and scoop remained in place but now the scoop had a valley running through it creating two halves.

Stunned and slightly embarrassed, I carried on walking looking at the ice cream and contemplating what to do next. Now I know perfectly well, I should have thrown it away but my cognitive function was impaired after this vicious attack.  I had taken only a few more steps when the first seagulls partner in crime decided to join in the attack. This time a full frontal assault took place as the second seagull brazenly and without fear took the whole cone, ice cream scoop and all, out of my hands and into their possession.

I tried to carry on as normal, looking unfazed by this hideous episode whilst inside I recoiled in shame and embarrassment at my public shaming at the hands (or wings) of the gulls of St Ives.

We decided to have a coffee and a cake on our way back in a small cafe called “Coasters Tea shop”. The cafe is close to the parish church of St Ives. The church, consecrated in 1434 and built of Cornish granite, is almost on the harbourside of the picturesque seaside town. 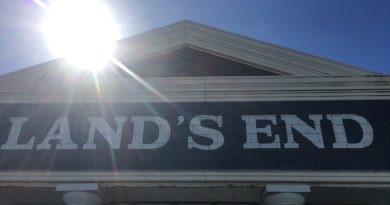 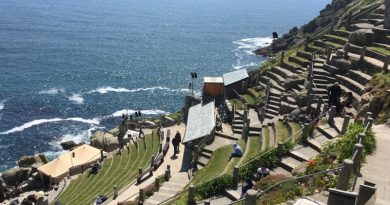 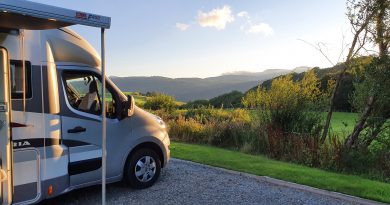