Prague, was so good but even some things have to come to an end. We left the Czech Republic and headed back to Germany on the next leg of our motorhome roadtrip.

We travelled south towards Munich on our motorhome holiday. However decided to break up our journey halfway and chose purely at random Steinberg am see. We stayed at a water ski centre called Wild Wake and Ski which also had camping facilities. This was to be the midway stop over on our route to Dachau concentration camp memorial.  We stopped off at a service station in the Czech Republic and spent the remaining Czech Koruna that we had left on a meal and drinks. Once back on our way it wasn’t long before we had crossed over the border back into Germany without any problems, in fact it’s only the signage that indicated to us that we had! The journey was a manageable 2 and a half hours, which meant we arrived at our new home for the night with plenty of time to relax.

The site is based at a waterski centre, with room for motorhomes, camper vans and caravans. On arrival we made our way into a reception area for the waterski centre. We spoke with the staff who were lovely, they allocated a pitch with electric hook up so off we went to sort ourselves out all at a very reasonable 15€ for 2 people and the electric!

The pitches were on a large grassed area, reasonably level with quite a pleasant view overlooking the lake. We wandered over to the lodge like facility that had a restaurant / cafe overlooking the water. We sat watching those being pulled round on the pulley system demonstrating their water skiing skills and prowess at mastering the jumps. Taking off from the ramps these waterborne ski jumpers were landing with such ease and composure. I was immediately transported back to a time some years ago when I unsuccessfully tried it myself, funnily enough also in southern Germany! The main difference being I lacked any finesse and certainly was far from composed in fact I could barely stand up! This time I chose to watch from the comfort of the veranda platform and from the lakeside while having a cappuccino.

We returned to the motorhome and whilst the evening meal was cooking I took a stroll around the edge of the lake and the surrounding woodland. After settling down we ate our meal, played music and drank wine as the sun fell and dusk began to set over the lake.

No morning alarms had been set so we woke naturally at around 9am. After showering, the obligatory cup of tea and a light breakfast we were on our way within the hour to our next port of call, Dachau. 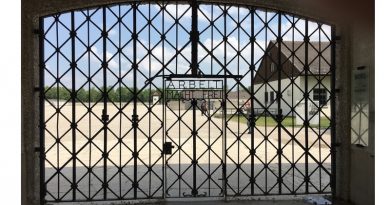 Visit to the lovely beach at Watergate Bay in Newquay 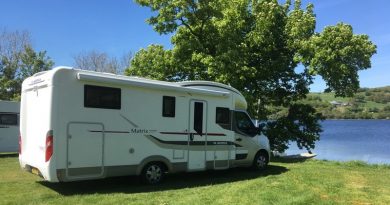